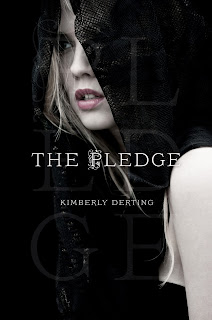 Hi guys! So here's is the review for the book I read this week! Let's start by recommending "The Body Finder" also by Kimberly Derting. It's about a girl, who has the power to sense dead bodies, and this ability is really useful when a serial killer comes to her town. It's a nice book and it has two sequels, so you can enjoy the story a little longer :)

The Pledge is also going to be a trilogy, and I already can't wait for the next one. The story is different and I think books are more enjoyable when the story is fresh, not similar to other book you have read. So here's the synopsis according to Goodreads:

In the violent country of Ludania, the classes are strictly divided by the language they speak. The smallest transgression, like looking a member of a higher class in the eye while they are speaking their native tongue, results in immediate execution. Seventeen-year-old Charlaina has always been able to understand the languages of all classes, and she's spent her life trying to hide her secret. The only place she can really be free is the drug-fueled underground clubs where people go to shake off the oppressive rules of the world they live in. It's there that she meets a beautiful and mysterious boy named Max who speaks a language she's never heard before . . . and her secret is almost exposed. Charlie is intensely attracted to Max, even though she can't be sure where his real loyalties lie. As the emergency drills give way to real crisis and the violence escalates, it becomes clear that Charlie is the key to something much bigger: her country's only chance for freedom from the terrible power of a deadly regime.

This book was a page-turner. I coudn't stop reading it and I found myself staying up late on a school night to finish it. The story is mysterious, so that I was really surprised when the secrets of Charlaina's power were revealed. The love story is also really nice, but maybe Kimberly could have waited a bit longer to develop the romance. But I totally enjoyed that Charlaina was a bit hard to get at the beggining. She is a strong female main character and does everything to protect her younger sister, Angelina, who by the way has her own mystery. I found every characters really interesting, because there were secrets envolving each character.
There is also a mean queen in this book, but it was cool that in this book there are only queens and no kings. Only girls can rule the country: GIRL POWER! Other thing that make this book enthralling is that the story is not only told from Charlaina's point of view but also from other characters' POV, like from the Queen, Max,.. The only problem with this book was the ending. I thought the ending of this book was going to be the ending of the trilogy! But I guess that's not really a negative point, because that really surprised me and now I keep asking myself what's to come in the sequel.
It was a really enjoyable book and I would recommend for people, who are fans of dystopia.
Posted by Unknown at 8:52 AM