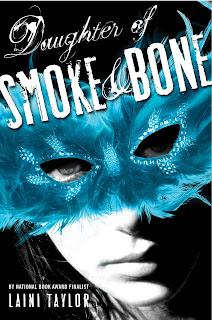 This must have been the most weirdly amazing book I've ever read. I know it's been out for about two monthts, but I just reread it last week and it still can't get out of my head. The cover got my attention first, but it wasn't long till the story got me addicted. Here is the synopsis according to Goodreads :

Around the world, black handprints are appearing on doorways, scorched there by winged strangers who have crept through a slit in the sky.
In a dark and dusty shop, a devil's supply of human teeth grown dangerously low.
And in the tangled lanes of Prague, a young art student is about to be caught up in a brutal otherwordly war.
Meet Karou. She fills her sketchbooks with monsters that may or may not be real; she's prone to disappearing on mysterious "errands"; she speaks many languages--not all of them human; and her bright blue hair actually grows out of her head that color. Who is she? That is the question that haunts her, and she's about to find out.
When one of the strangers--beautiful, haunted Akiva--fixes his fire-colored eyes on her in an alley in Marrakesh, the result is blood and starlight, secrets unveiled, and a star-crossed love whose roots drink deep of a violent past. But will Karou live to regret learning the truth about herself?
The first time I read what this book was about, I was intrigued. I couldn't imagine a story, in which teeth and handprints were something important. My curiosity won me over and I started reading it immediately. I was fascinated by it from page one. Karou is a great main character, she makes you like her from the beginning. She is also a mystery and I was captivated. I couldn't wait to know more about her.
Karou grew up with a few Chimaera, who she regardes them as her family. They are sweet and sympathetic, even if the angels don't have the same opinion as me.
There is a war between the angels and the Chimaera, but the demons have been winning for a long time. But now the angels are back with full force. In this war teeth play an important role. Unfortunately for Karou, she falls in love with an angel, Akiva. Akiva is so well-written. First I really thought he was bad, but his transformation in the end of the book is palpable. Zuzana, Karou's best friend, is a great character, too. She balances the supernatural and the normal sides of Karou. I like how Karou still tries to have a normal life and Zuzana is a big part of it.
The fact that Laini Taylor chose Prag as the main city of this book, also impressed me. The city gives the story a different touch, being small and romantic but still withholding secrets, this city would also be my first choice for this book. But Karou doesn't always stay in Prag, she travels a lot and I enjoyed reading about all the different places. I was even a bit jealous when she went to Paris, oh my.
Daughter of Smoke and Bone managed to surprise me more than other books have. There were stuff that I didn't even imagine happening in it, nevertheless they did. Which is kind of awesome!
Laini's writing is astonishing, and I'm not surprised that her book was nominated several times as one of the best books of the year. This book is dazzling and if you haven't read it yet, now is the time to start.
Here is the full book trailer for Daughter of Smoke and Bone :
Posted by Unknown at 2:02 PM