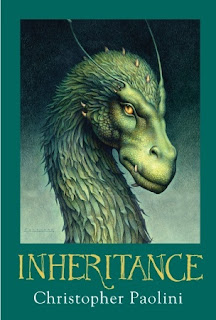 Hello guys! Im so so sorry for the delay, I just had a lot to do for school so I didn't have much time to finish reading Inheritance. But I did end it today, finally. So let's get down to business ! First I would recommend reading the other books Eragon, Eldest and Brisingr, but if you think that it's too much at least read Brisingr. But if you don't have a lot of time in your hands, fear not, because in the beginning there is a brief summary about everything that happened till Inheritance. I must say now that I was never such a Eragon fan. I never could remember the characters' names and then I was for the most part confused, but then if you have a better memory than me this was never a problem. Nevertheless I read this book because I don't like not knowing how the story will end. But the outcome indeed surprised me.
I enjoyed this book immensely while the other three failed to grab my attention. Inheritance has everything the others lacked: enough mystery to make me want answers, romance (not enough though!), suspense and a lot of action, although the other ones did have action in them but not as this one. The war is really on this time and the different characters' point of view makes the book exciting. We can really imagine the battles they fight, as we get to watch it from every point of view. And Christopher Paolini's writing doesn't make it all that difficult to imagine; for he describes everything in details. I also enjoyed some nice surprises throughout the book. But the big surprise and a small disappointment (for me) was the ending. I was so sure about the ending of Inheritance before reading it, but the ending was totally different from what I imagined it! But it was nice ending, anyway. Another nice thing was that the book still goes on even after the war has ended. I love to know what will happen to the characters once something big happens. Most books end after a big event and you don't receive a lot of information about the characters' future. I'm sure a lot of you like it to imagine the future of your beloved characters, but I don't. I like to know what the author of the book imagines because he was the one who created in the first place. But anyway this book was great! And I'm glad I decided to read it even after not enjoying the other three. It was a nice ending for the long-awaited conclusion of the Inheritance cycle.
Ps.: For those of you, who haven't read Eragon I would strongly recommend thinking before buying the book. If you are a big fan of action then this book may just be what you are looking for. I guess fans of Lord of the Rings would enjoy this book, too.
Posted by Unknown at 2:04 PM