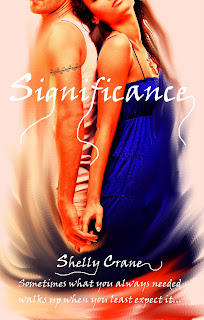 A book that will keep you hooked from page one! Now to the summary:

Maggie is a seventeen year old girl who's had a bad year. Her mom left, her dad is depressed, she's graduating, barely, and her boyfriend of almost three years dumped her for a college football schalorship. Lately she thinks life is all about hanging on by a thread and is gripping tight with everything she has. Then she meets Caleb. She saves his life and instantly knows there's something about him that's intriguing but she is supposed to be on her way to a date with his cousin. But things change when they touch, sparks ignite. Literally. They imprint with each other and she sees their future life together flash before her eyes. She learns that not only is she his soul mate, and can feel his heartbeat in her chest, but there is a whole other world of people with gifts and abilities that she never knew existed. She herself is experiencing supernatural changes unlike anything she's ever felt before and she needs the touch of his skin to survive. Now, not only has her dad come out of his depression to be a father again, and a pain as well, but Caleb's enemies know he's imprinted and are after Maggie to stop them both from gaining their abilities and take her from him. Can Caleb save her or will they be forced to live without each other after just finding one another? 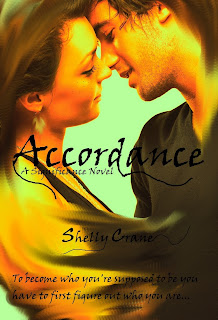 So I decided to review Significance and its sequel at once. I read the first one so fast and the second one starts right where the first one left off, so I didn't feel like they were two books and not a really long one ;). The story is really unique with a touch of supernatural in it. The love story will probrably fill your twilight withdrawl and you will be asking for more in no time! Maggie is a strong character and she shows her strength from the very beginning. She had a difficult year and went through some hard stuff, but she holds her own and doesn't mope. The romance starts really early in the story. But you shouldn't think that because the love story takes off in the beginning that the book will be boring. Crane did an awesome job with the plot. The characters are really well written and real. Leaving aside the paranormal side of the story, this book describes some everyday-life problems like getting your father to accept your boyfriend or deal with a parent that left you behind. The romance can be sometimer over the top, but you get used to it and understand why it must be like that. Caleb and Maggie imprinted, that means they are soulmates and are going to receive their new abilities real soon, much to the unhappiness of the other clans of Aces (people who can imprint). For sometime now no one has imprinted with another person, turning this new match between Maggie and Caleb into something really special. Throughout both books they must face a lot of problems and it seems like it will never stop, which keeps this book exciting instead of tedious. Maggie and her Significant share their thoughts and I couldn't help sometimes but think this was a good idea of Crane to keep us informed about both Maggie and Caleb thoughts on something. Albeit having imprinted on Caleb, Maggie still has some reservations about Caleb's feelings being fake or just because of the imprint. I found it interesting how she leads with that, not wanting to go to fast in a relationship they know will last forever.
I enjoyed this book a lot, I had some reservations of my own at first thinking that this book would only be about a girl and a guy handling their relationship problems, but this book is more than just their romance. However this book had some mistakes in it, but otherwise it was enthralling. The third book of the series will come out April 2012. Can't wait!
Posted by Unknown at 11:00 AM