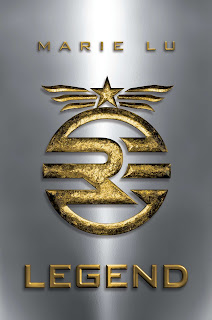 What was once the western United States is now home to the Republic, a nation perpetually at war with its neighbors. Born into an elite family in one of the Republic's wealthiest districts, fifteen-year-old June is a prodigy being groomed for success in the Republic's highest military circles. Born into the slums, fifteen-year-old Day is the country's most wanted criminal. But his motives may not be as malicious as they seem.

From very different worlds, June and Day have no reason to cross paths - until the day June's brother, Metias, is murdered and Day becomes the prime suspect. Caught in the ultimate game of cat and mouse, Day is in a race for his family's survival, while June seeks to avenge Metias's death. But in a shocking turn of events, the two uncover the truth of what has really brought them together, and the sinister lengths their country will go to keep its secrets.

Full of nonstop action, suspense, and romance, this novel is sure to move readers as much as it thrills.

I totally agree with this last sentence! This book was a pleasant surprise. I was just searching for something to read and I came across this book as a recommendation from amazon. I read the summary and I just had to read it. I'm addicted to dystopia and I asked myself how had I not read something about this book earlier! It was love at first page. I couldn't stop reading it, the story was so fresh, the characters so real and different. I loved how Marie Lu shows us both sides of the story. June is an extremely intelligent girl, who enjoys the perks of living in the rich side of the Republic. Day, on the other side, is a criminal, who tries to help his poor family and at the same time attempts to weaken the Republic. The story is told between Day's and June's point of view. One day at a mission, June's brother Metias gets killed. The government puts the blame on Day. A few days later Day and June meet. As the story unfolds, I couldn't keep myself from reading it at school or staying up so late at night. It makes you addicted! You see how June's feelings change towards her so beloved Republic throughout the book and the reader will feel it with her, too. I loved the romance, it was like a version of Romeo and Juliet (both being from different living standards and still falling in love) but the difference is: they were tricked into meeting each other. The Republic will really do anything to keep its horrible secrets. But I won't give away more details, you will have to read the book for yourself to find out more! The secundary characters were really well-written and they were easy to like. Day's little friend, Tess, is so sweet and I liked her a lot. I was a bit sad because of Ollie, June's dog. I can't believe he was left behind :( !! Hopefully he will make an appearance in future books.

Marie Lu's writing is amazing. I have no words. I loved how small things you really didn't waste a second thought about, turn out to be important pieces of evidence in the end. This book will surprise you constantly. Legend caught me off guard; for I really didn't think it would be such a great book and that I would enjoy it this much. This sentence really sums it all up: Full of nonstop action, suspense, and romance, this novel is sure to move readers as much as it thrills!
This book is without a doubt one of the best of 2011 for me. I can't wait to read the sequel, which will be released Fall 2012.