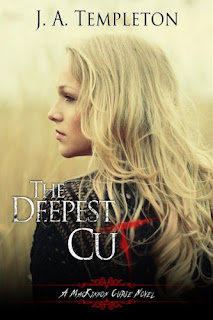 Sixteen-year-old Riley Williams has been able to see ghosts since the car crash that took her mother’s life and shattered her family. Guilt-ridden over the belief that she’s somehow responsible for her mom’s death, Riley is desperate to see her mother’s elusive spirit to gain her forgiveness.

When her father moves the family to Scotland so they can all start over, Riley believes her life couldn’t get worse––that is until the ghost of nineteen-year-old Ian MacKinnon catches her purposely cutting herself. An uneasy truce quickly turns into friendship, and soon Riley’s falling hard for Ian.

Riley believes her gift could help Ian end the curse that has kept him tied to the land for centuries, but that would mean letting him go forever and she’s not sure she is strong enough to do that. As if her life wasn’t complicated enough, the spirit of the woman who killed Ian returns and she’ll stop at nothing to keep Riley from helping Ian find eternal peace.

I HAVE NO WORDS! I mean I even took one day to sort my feelings and thoughts on this book before writing a review, and I still can't describe how good this book was. The book takes place in Scotland, which just gives the story more charm. J.A. Templeton picked the best place for this book, Scotland's old cities fits perfectly with the story. I mean, ghosts and old castles and inns = perfect match.

Riley could be a real person, she was so well-written and genuine. Sometimes I felt like she was coming out of the book, yes she felt really that real. After the car crash, which killed her mother, Riley went through a hard phase. She believes it is her fault that her mother died, so she starts to cut herself to take away the pain inside. Oh and to top it all she can see ghosts after the accident. The worst part is that her mother never comes to visit. Riley then has to move to Scotland with her family so they can have a chance to start over. There she meets the ghost of nineteen-year-old (plus 200 years roaming the earth) and hottie, Ian. After such a long time being alone and having no one to talk to, Riley finds in Ian a good friend. Well until she falls head over heels in love with him, that is. But could this relationship have a future?

In the beginning I kind of hated Riley's brother Shane, but with time he grew on me. Whereas in the beginning he was a pain in the *butt*, in the end he was one of the sweetest guys in the book. He blamed Riley for moving their family to Scotland and treated her badly. But after some events (read the book!) he changes and is really sweet. One of my favorite scenes in the book is when Shane opens up to Riley about his feelings towards the accident and Riley's guilt. So sweet, I wished I had a brother so that he could be that nice to me!

Riley's and Shane's friends were also real and typical characters. You could meet any of those types of people in your school. I loved reading this book and thinking: wow this characters is really like this person I know. I think when a writer writes such genuine characters, you can connect better to the story, and this book is totally the case. You can associate with any of the characters, especially Riley.

Now to the bad girl. Laria is completely crazy! She is a ghost too, but in life she was in love with Ian. Unfortunately for her he was promised to another girl and only saw Laria as a friend and maid. She worked for his family in the castle and knew she didn't have a chance with him, but that didn't stop her. She got involved with the Dark Arts and poisoned Ian because she couldn't get her way. And only poisoning was not enough for her, she cursed him too so that he had to roam the earth forever. Until Riley came to ruin her revenge, which only got her madder. She torments Riley and her family to get Riley to give up helping Ian and prevent them from being together. Oh and she will provide some nightmares !

I have to admit that at first I thought this book would be like The Mediator by Meg Cabot. I don't know if you read this series but the story in Mediator is really similar, but the outcome totally different. And I must say I loved the difference! This book should totally get more attention, since it definitely made my list of best books this year. It's not like other books in which the romance is so obvious and going to end well no matter the obstacles in the way. The Deepest Cut has everything you want in a book: romance, supernatural aspects, genuine characters, great main characters, a hot love interest, amazing plot and good unfolding of events. It will make you deriously addicted to it and you will probably be up all night like me reading it!