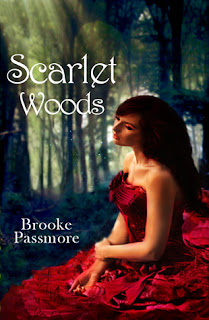 Past, future, and love all exist in the door through time.

Modern and independent seventeen year old Morgan Westbrook thought she had seen all there was to her home town of Scarlet, Georgia, but one day while walking in the woods behind her house she discovers a mysterious door masked behind the trees. After admiring the door’s timeless beauty she walks through its entrance to venture into more woods, but what she doesn’t know is that the door is a gateway through time that takes her back to the year 1863 during the days of the Civil War in Scarlet.

Without knowing that she had traveled back in time, she stumbles upon Danny Carson, an attractive young man who is appalled to see that Morgan is wearing skimpy modern clothes instead of a nineteenth century dress. Although they find each other completely different than anyone they’ve ever known, they cannot help but feel drawn to one another. After spending time in another century, she discovers that she's time traveled back to the year 1863 and that the door took her there. For months she and Danny journey back and forth through the door to experience the joys of traveling to both of their centuries. When dilemmas of unwanted marriage, slavery, and war are thrown at them, they must face the perils that time travel has delivered them in both the future and the past.


I really enjoy reading books about time traveling. Mostly it gives us the best of two worlds and that's totally the case with Scarlet Woods. The premise is a bit different than the usual time traveling novel. I really liked the twist in the beginning when Morgan doesn't realize that she went back in time and makes a fool of herself. The wonder that both characters show while going further and back in time is really enjoyable to read and of course, leaves the readers dreaming about having such an awesome opportunity.

Surely Morgan and Danny fall in love. I was kind of expecting but I wasn't expecting that they would deal so well with it. I mean, they are from two different times! But that was almost never an issue, which I liked and disliked at the same time. The other characters are a great addition to the series. I particularly enjoyed reading about Charlotte (Danny's sister) and Thomas (Danny's best friend and Charlotte's future husband). Evelyn and Ray were also suitable in the story.

Being a history fan, I was delighted to hear more about the Civil War. While reading Scarlet Woods, I was also learning about the history of the USA and it was nice to be able to compare the information. I also praise the author for handling well the situation about telling Danny the outcome of the war. It certainly would be difficult to anyone to know that you are going to lose the war which you've gotten yourself into.

Overall it was a enjoyable read. Sometimes the plot dragged a bit but other times I would read a hundred pages and wouldn't even realise it. There were some details in the story that I would have probably left it out of the story but I understand that sometimes it's impossible. Looking forward to the sequel! Great read for people who love historical fiction and romance!

Thanks to Brooke Passmore for providing me with a copy for review!