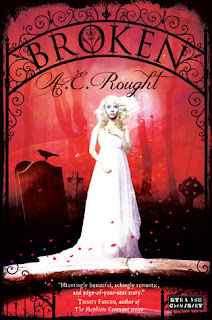 Imagine a modern spin on Mary Shelley’s Frankenstein where a young couple’s undying love and the grief of a father pushed beyond sanity could spell the destruction of them all.

A string of suspicious deaths near a small Michigan town ends with a fall that claims the life of Emma Gentry's boyfriend, Daniel. Emma is broken, a hollow shell mechanically moving through her days. She and Daniel had been made for each other, complete only when they were together. Now she restlessly wanders the town in the late Fall gloom, haunting the cemetery and its white-marbled tombs, feeling Daniel everywhere, his spectre in the moonlight and the fog.
When she encounters newcomer Alex Franks, only son of a renowned widowed surgeon, she's intrigued despite herself. He's an enigma, melting into shadows, preferring to keep to himself. But he is as drawn to her as she is to him. He is strangely... familiar. From the way he knows how to open her locker when it sticks, to the nickname she shared only with Daniel, even his hazel eyes with brown flecks are just like Daniel's.
The closer they become, though, the more something inside her screams there's something very wrong with Alex Franks. And when Emma stumbles across a grotesque and terrifying menagerie of mangled but living animals within the walls of the Franks' estate, creatures she surely knows must have died from their injuries, she knows.

I liked Broken. Don't get me wrong, I did. But the first thing that bothered me was the summary. I mean, they give almost everything away and you dive into the novel almost expecting every twist and turn (which are not that many). That really took the pleasure away of reading it. And then, the author leaves to many obvious clues, so everything was really no surprise. It feels a bit pointless now to have read the whole novel because I really knew how everything would turn out.

The story itself is nicely done if you aren't bothered by too many clues. However I wouldn't necessarily say that Broken is a remake of Frankenstein; I rather thought it was inspired by but that's it. Furthermore I thought the story to be too focused on the couple and nothing else grabbed my attention. A subplot would have been nice. Daniel's accident was the only thing that really got me curious throughout the novel: how had he died? Nevertheless I enjoyed reading this novel but mostly because of the dark Gothic aspects; the author really nailed these. Sometimes I thought I was in some kind of Halloween movie.

The characters are pretty much ok. I liked Emma as a character even though she was sometimes a bit too depressed for me. She is strong and doesn't take crap from anyone. Alex was a bit confusing. I mean, after the summary hints at Frankenstein is almost impossible for you to miss the huge clues to who Alex really is. That's the problem with a too detailed summary, it leaves little to the imagination. The romance was sweet but too intense sometimes. Not to mention Emma's mother, she was intense with a capital I.

Overall, I liked reading the novel but I wouldn't read it again. That's saying something because I almost always reread my books. The Gothic-feel to it was certainly there but the story fell short, in part because of the synopsis. For those of you who enjoy novels with more action and entertaining characters, this is surely not for you. With overdescriptive writing and a rather monotone plot, Rought's novel is not for everyone.

Thanks to Strange Chemistry for providing me with a copy of Broken for review!