ARC Review: Through The Ever Night - Veronica Rossi 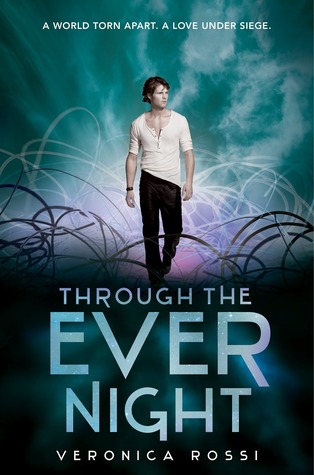 It's been months since Aria last saw Perry. Months since Perry was named Blood Lord of the Tides, and Aria was charged with an impossible mission. Now, finally, they are about to be reunited. But their reunion is far from perfect. The Tides don't take kindly to Aria, a former Dweller. And with the worsening Aether storms threatening the tribe's precarious existence, Aria begins to fear that leaving Perry behind might be the only way to save them both.

Threatened by false friends, hidden enemies, and powerful temptations, Aria and Perry wonder, Can their love survive through the ever night?

Through The Ever Night is unbelievably amazing. It's no wonder that Veronica Rossi is one of my favorite writers right now. I'm shocked that a sequel could be as good as this one was. Everything, from the characters' development to the course of the story, was amazing and beautifully written.

The story sets a great pace for a second novel in a trilogy. It's not as eventful and fast paced as the first one but it doesn't drag, either. Everything that happens feels natural and suitable for the story. I'm still in awe of Rossi's beautiful and enthralling way of writing.

Aria and Perry, where to start? I really loved them in the first one but that doesn't even compare to how I feel about them now. I can't wait to know where the story will take them. One thing that I really value in a novel is when you can connect with the characters and Rossi really accomplished this so far. Aria really grows as a character; if you reread Under The Never Sky, the difference in character is palpable. Perry is no exception. And Roar and Liv, the other amazing couple of characters. It's incredible how each character has a such a unique and own personality.

I'm sure that anyone that was looking forward to Through The Ever Night's release won't be disappointed. I wouldn't even be surprised if some of you think that this one was better than its prequel. Yep, that's how good this novel was. Now we will have to wait till 2014 to see where Rossi will take our beloved characters next.

A super huge thanks to HarperTeen for providing me with a copy of this wonderful novel!
Posted by Unknown at 11:26 AM

Email ThisBlogThis!Share to TwitterShare to FacebookShare to Pinterest
Labels: HarperTeen, Through The Ever Night, Under The Never Sky, Veronica Rossi