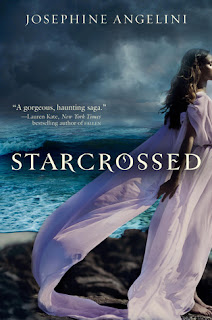 Set on the island of Nantucket, STARCROSSED tells the tale of Helen Hamilton, a young woman whose destiny is forever altered when she meets Lucas Delos and tries to kill him in front of her entire high school. Which is terribly inconvenient, not only because Lucas is the most beautiful boy on the island, but also because Helen is so achingly shy she suffers physical pain whenever she is given too much attention.
Making matters worse, Helen is beginning to suspect she’s going crazy. Whenever she’s near Lucas or any member of his family she sees the ghostly apparitions of three women weeping bloody tears, and suffers the burden of an intense and irrational hate. She soon learns that she and Lucas are destined to play the leading roles in a Greek tragedy that the Three Fates insist on repeating over and over again throughout history. Like her namesake, Helen of Troy, she’s destined to start a war by falling in love. But even though Lucas and Helen can see their own star-crossed destiny, they’re still powerfully attracted to each other. Will they give up their personal happiness for the greater good, or risk it all to be together?

Am I the only stupid book lover that hadn't read this stunning novel?! I mean, really, how could it be that I hadn't read Starcrossed till now because it sure seems as it was made for me?! If you read my previous reviews, you probably have seen that I'm a sucker for angel-themed novels but now the real deal for me are demigods!

Angelini did an amazing job keeping everything totally mysterious, making question marks appear in my head completely out of the blue which for me made the novel the even more captivating. And I must praise the author even more for writing a novel completely to my taste: I just LOVE Greek mythology and adding to that a delicious romance and full-on action, this novel was just plain irresistible! Needless to say I fell in love with Starcrossed from the very start.

Oh the characters..I was fond of each and every one of them in this novel. They were all so different and even though the story could be a bit repetitive (for a fanatic of Greek mythology like me), it certainly wasn't. It was fresh and completely addictive. The romance can only be described in two words: deliriously delicious; although Lucas and Helen are destined to be together, they just can't resist the urge so that in the beginning they really hate each other and even attempt to kill each other! Of course somehow they manage to break the curse but they don't jump into a relationship either keeping the romance believable and real.

I can't emphasize enough how much I enjoyed this book. Sure one thing did really bother me: the characters can't do math (but to know why I think you should read this novel, like right now! Not that I'm bossing anyone around..) But Angelini wrote one of those novels that just transport you to another place. If you enjoy mythology, romance, action, supernatural beings (hot demigods, anyone?!) and just books that keep you enthralled all the way till the very last word, then this book is one I certainly recommend. And best of all, the sequel will come out May 29th, so that the wait will not be that unbearable (who am I kidding, I'm dying over here!)

Josephine Angelini is a Massachusetts native and the youngest of eight siblings. A real-live farmer's daughter, Josie graduated from New York University's Tisch School of the Arts in theater, with a focus on the classics. She now lives in Los Angeles with her screenwriter husband. Website / Twitter