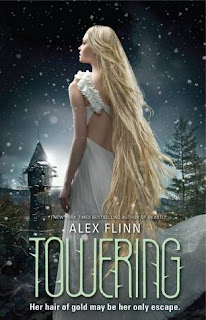 
At first, I merely saw his face, his hands on the window ledge. Then, his whole body as he swung himself through the window. Only I could not see what he swung on.
Until, one day, I told my dream self to look down. And it was then that I saw. He had climbed on a rope. I knew without asking that the rope had been one of my own tying.

Rachel is trapped in a tower, held hostage by a woman she’s always called Mama. Her golden hair is growing rapidly, and to pass the time, she watches the snow fall and sings songs from her childhood, hoping someone, anyone, will hear her.

Wyatt needs time to reflect or, better yet, forget about what happened to his best friend, Tyler. That’s why he’s been shipped off to the Adirondacks in the dead of winter to live with the oldest lady in town. Either that, or no one he knows ever wants to see him again.

Dani disappeared seventeen years ago without a trace, but she left behind a journal that’s never been read, not even by her overbearing mother…until now.

I'm a huge fan of fairytale retellings and I've heard so many things about Alex Flynn and I knew that I had to read one of her books. I don't know why I have never read of her novels but when I saw a retelling about Rapunzel (a fairytale that is not easily and modernly retold), I just had to request a copy for review. A big plus was also that one of the main characters is called Rachel (sorry, I just had to mention it)!

The thing about retelling Rapunzel is that it's not an easy story to retell it in a modern way. There is nothing modern about locking a girl away in a tower nowadays and maybe that was just me, but I was really skeptical throughout the novel. I don't think it's entirely Flynn's fault, nevertheless I couldn't enjoy the story completely. I know that the magical aspects of the story couldn't completely disappear but there some things that didn't go well with me, like the whole story with the drugs and some cheesy parts which I didn't expect in a modern retelling. Furthermore some things weren't even explained and I just had the feeling that the novel felt incomplete (I still don't understand Dani's appearances and how they knew Rachel was going to be a special child..but I guess that's the fairytale aspect of the story).

The characters fell in the "ok" category. They weren't that special but enjoyable anyway. Maybe a bit too "fairytale-ish" for a modern retelling. Rachel was too naive and just like a Disney princess and Wyatt was the perfect prince, even though the author tried to incorporate some darker aspects into his past.

I'm not saying that I didn't enjoyed it, I did, yet it didn't blow my mind away as a fairytale retelling. Maybe I just started with the wrong novel since Flynn's retelling are usually well-reviewed. I certainly will give this author another shot. Rapunzel IS a difficult fairytale to modernize. Nonetheless I would recommend this one to those of you who are in need of a pleasant and rather slow-paced novel.

Thanks to HarperTeen for providing me with a copy for review!
Posted by Unknown at 1:39 PM