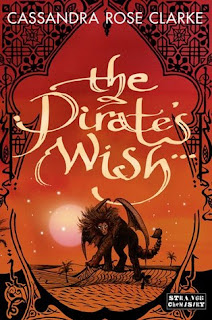 After setting out to break the curse that binds them together, the pirate Ananna and the assassin Naji find themselves stranded on an enchanted island in the north with nothing but a sword, their wits, and the secret to breaking the curse: complete three impossible tasks. With the help of their friend Marjani and a rather unusual ally, Ananna and Naji make their way south again, seeking what seems to be beyond their reach.

Unfortunately, Naji has enemies from the shadowy world known as the Mists, and Ananna must still face the repercussions of going up against the Pirate Confederation. Together, Naji and Ananna must break the curse, escape their enemies — and come to terms with their growing romantic attraction.

This is something I rarely say about sequels but: I prefered The Pirate's Wish to its prequel, The Assassin's Curse! I'm plesantly shocked since the first novel in a series is almost always better than its sequels. Cassandra really achieved the impossible with this one. I was totally captivated and the world-building, the romance and even the characters developed so much in contrast to the prequel. The Pirate's Wish is exactly what every sequel should be: better.

There is a great pace to this novel, it a great mix of slower paced scenes with action-filled ones. It is the perfect sea adventure, with pirates and magic, curses and a unique humor. I also loved the building up to the romance, since we didn't get much of it in the first novel. It was so much fun to read, even more so than the first. I didn't know that this was the conclusion to this series when I started it, but now I that I know, it does certainly feel like a conclusion, with the curses broken and the romance question answered. But it was a blast to read just how they got to this point.

The main character, Ananna, is a great heroine. She is sarcastic and independent, naive and sweet. She is not the usual main character and that's refreshing. She is just so strong and thinks about her interests as well as those of the others. She loves Naji but she doesn't let her feelings cloud her dreams, she would make the best of it, even if he didn't like her back. She has a hard shell but a soft core. Naji is also a nice partner for her, he is not as expected. He is not swoony, but nice in his own way. He was way more romantic in this one too (I was even a bit surprised!). The manicore was, in my opinion, the best addition possible! She was funny in that serious way and made this novel even more entertaining.

All in all, The Pirate's Wish was a great conclusion to this captivating adventure. The romance is awkward, sweet and funny to read. The plot feels a lot like the Pirate of the Caribbean films with quest to break the curse, lots of dry humor and an adorable romance. Just what a fantasy should feel like. I really like fantasy novels and this one is certainly a great addition to the genre.

Huge thanks to Strange Chemistry for providing me with a copy for review!