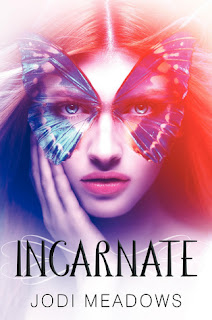 New soul
Ana is new. For thousands of years in Range, a million souls have been reincarnated over and over, keeping their memories and experiences from previous lifetimes. When Ana was born, another soul vanished, and no one knows why.
No soul
Even Ana's own mother thinks she's a nosoul, an omen of worse things to come, and has kept her away from society. To escape her seclusion and learn whether she'll be reincarnated, Ana travels to the city of Heart, but its citizens are afraid of what her presence means. When dragons and sylph attack the city, is Ana to blame?
Heart
Sam believes Ana's new soul is good and worthwhile. When he stands up for her, their relationship blooms. But can he love someone who may live only once, and will Ana's enemies--human and creature alike--let them be together? Ana needs to uncover the mistake that gave her someone else's life, but will her quest threaten the peace of Heart and destroy the promise of reincarnation for all?

Let's start admiring the cover: I fell in love with it the first time I saw it; it's so beeeautiful! And the butterfly touch is great, it has everything to do with the book. But if the cover didn't get your attention, then the story certainly will.

There are not enough words in my vocabulary to describe how good this book is, but the one I would choose to best describe Incarnate is: STUNNING! I loved this book from beginning to end, I don't know why I didn't read it sooner. But when I did start reading it, I couldn't put it down! I don't think my teachers were that happy with me at school (sorry!) but it was worth it.

I never gave much thought to incarnation, but now I enjoy reading about it. How would you feel if you were the only one who wasn't reborn? And better yet if you took the place of a person who was supposed to be reborn and people were angry with you because they knew that person for 5000 years?! Well, Ana's life is no picnic. Besides struggling with all these things, she had to endure mother's lack of love for 18 years. Actually lack of love is saying it nicely, she hated Ana and mistreated her every chance she got.

But finally Ana's 18th birthday arrives and she can go to Heart and try to find out more about her birth and the reasons behind it. On the way to the city she meets Sam. Hottie-and-swoon-worthy Sam. Not that the hit off from the start. Ana is a bit suspicious of everything but Sam is nothing but patient and nice to her. I loved the way he was with her, even when he was still hesitating about their relationship. But I mean an easy romance is not a good romance! And even the conflict about Sam's and Ana's age (he has been around for 5000 years!) put a new edge on the romance. And I loved Stef, Sam's friend. She/He was funny and I wanted to see more of her/him in the book but maybe next time..

Ana was a great heroine, probably one of my favorites (and I don't have many!). She was impulsive but knew how to behave, brave and nice. I also liked that even being in a really bad situation, she wasn't a depressed character the whole time and made the most out of everything anyway. Let her kick her clothes to let off some steam! She also had a bit of a bad temper and was cynical, much like me! So I identified myself a lot with her. Jodi writes wonderfully, she really has a way to describe how Ana's feeling so you can imagine yourself in the situation perfectly.

And the end was amazing! The next book can't come out soon enough..this year will be a very very long year. But at least we have other amazing books coming out till then to occupy us :). I would recommend this book to anyone who loved Under The Never Sky ( I don't know why this book specifically but Incarnate reminded a bit of it) but mostly anyone who enjoys young adult books, will enjoy it.