The Alchemy of Forever - Avery Williams 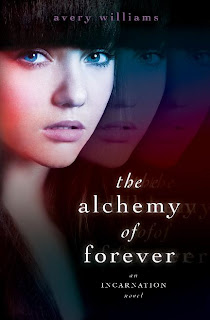 After spending six hundred years on Earth, Seraphina Ames has seen it all. Eternal life provides her with the world's riches but at a very high price: innocent lives. Centuries ago, her boyfriend, Cyrus, discovered a method of alchemy that allows them to take the bodies of other humans from jumping from one vessel to the next, ending the human's life in the process. No longer able to bear the guilt of what she's done, Sera escapes from Cyrus and vows to never kill again.

Then sixteen-year old Kailey Morgan gets into a horrific car accident right in front of her, and Sera accidentally takes over her body while trying to save her. For the first time, Sera finds herself enjoying the life of the person she's inhabiting--and falling in love with the boy who lives next door. But Cyrus will stop at nothing until she's his again, and every moment she stays, she's putting herself and the people she's grown to care about in danger. Will Sera have to give up the one thing that's eluded her for centuries: true love?

I can't believe that I enjoyed The Alchemy of Forever as much as I did. It did start slow, and I asked myself if I really wanted to keep reading but after reading more chapters I couldn't put it down! I had never thought that reincarnation could be such an amazing topic for a young adult book.


The story is told from Seraphina's point of view and can I say that she is one of my favorite main characters of all time?! I just loved everything about her: she is brave, sweet and really just looking for a way to be happy, even if it means dying. I mean, how would you feel if your life meant another person's death? And she has been doing that (guiltily) for many years. But only because Cyrus makes her do it. I found her struggle so realistic, she really can't take it anymore and tries to do the noble thing: die. But of course the story could not end like this: 16-year old Kailey gets into an accident right in front of Seraphina, and to save her she takes over her body.


Williams really portrays well how Seraphina is feeling after taking over Kailey's body and her life, as well. She tries to escape that life, but finds herself not being able to. She is finally happy after so many years on earth. But when she finds herself in love with Noah and being love in return, things couldn't be better. Or maybe till Cyrus makes an appearance. And that's when the action starts. He is the perfect villain: he is immortal and he can look like anyone! I just couldn't believe everything he does just to get Seraphina back. I have to admit: I dislike him so much that sometimes I just wanted to punch my book. But anyway I loved every character in this book, Williams did a great job creating each one of them.


The ending was a BIG surprise. I mean a big, big surprise. And I just loved the way that felt. Not being able to know what was going to happen at the very end. Furthermore I still have no idea what's in store for us in the sequel (which can't come out soon enough, ugh). Williams delivered us a stunning debut, and I can't wait to read more of her books. This book was just breathtaking.
Posted by Unknown at 1:25 PM