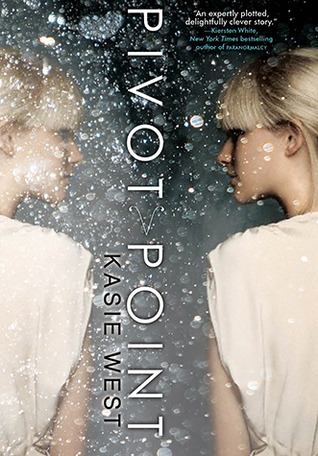 Addison Coleman’s life is one big “What if?” As a Searcher, whenever Addie is faced with a choice, she can look into the future and see both outcomes. It’s the ultimate insurance plan against disaster. Or so she thought. When Addie’s parents ambush her with the news of their divorce, she has to pick who she wants to live with—her father, who is leaving the paranormal compound to live among the “Norms,” or her mother, who is staying in the life Addie has always known. Addie loves her life just as it is, so her answer should be easy. One Search six weeks into the future proves it’s not.
In one potential future, Addie is adjusting to life outside the Compound as the new girl in a Norm high school where she meets Trevor, a cute, sensitive artist who understands her. In the other path, Addie is being pursued by the hottest guy in school—but she never wanted to be a quarterback’s girlfriend. When Addie’s father is asked to consult on a murder in the Compound, she’s unwittingly drawn into a dangerous game that threatens everything she holds dear. With love and loss in both lives, it all comes down to which reality she’s willing to live through . . . and who she can’t live without.

First of all, I was totally attracted to the gorgeous cover and secondly, the summary sounds amazing. After reading Pivot Point, I'm so happy that the cover reflects the novel's beautiful writing and its enthralling plot. Pivot Point exceeded my expectations and believe me, they were pretty high. Pivot Point is that typical amazing novel that you don't know if you should write a review 30 pages long or just put it simply like this: drop everything tomorrow and go buy this novel, asap!

The plot blew my mind away, seriously. Addison has the ability to see her future, so the each chapter is about the two different paths that Addison can choose in her life: to stay in the compound with her mother and the people with abilities or to go with her father to live among the Norms. This completely original concept was so exciting and extremely enthralling that I couldn't put this book down! Furthermore both paths complemented each other and it was fun being able to see how both paths intertwined.

And then, the characters. It's actually pretty impressive and surprising if I end up liking all characters in a novel. Pivot Point was this impressive and surprising case. Addison was a great main character; she is rather quiet, responsible and a bit timid. She has her own personality and I enjoy when characters are not over the place. Each character had its own personality and I could put myself into everyone's shoes, so they were realistically written as well.

Overall, I just loved Pivot Point. I'm completely sure that it was one of my favorite reads this year, maybe even THE favorite novel in 2013 but it's too early to be able to say this. But I'm certain that anyone will enjoy this fantastic novel which is really original and impossibly captivating! I'm dying to get my hands on the next one!