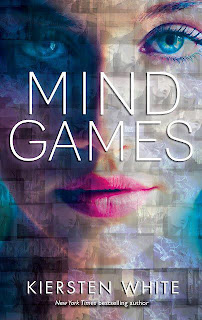 Fia was born with flawless instincts. Her first impulse, her gut feeling, is always exactly right. Her sister, Annie, is blind to the world around her—except when her mind is gripped by strange visions of the future.

Trapped in a school that uses girls with extraordinary powers as tools for corporate espionage, Annie and Fia are forced to choose over and over between using their abilities in twisted, unthinkable ways… or risking each other’s lives by refusing to obey.

A great start to a promising new paranormal trilogy. Mind Games starts with a captivating way of alternating the narrator between Fia and Annie. We get to know each of them well and also to know why everything turned out this way. I really enjoyed this mix and was rather anxious to start each chapter.

The story starts rather sudden but in an exciting way. At first I thought the romance was going to be that kind of "insta-love" but after reading more in the novel, we get to know Fia and her special power and it's easy to understand why things feel a bit "rushed". I found the rhythm of the plot to be positively different: it was steady throughout the novel. The concept and world building were amazingly done and I was surprised that I enjoyed so much yet another novel about teenager with special supernatural powers. Nevertheless I would have enjoyed to know more about this special school and the Lerner group, what are their plans? Since this is a trilogy, I guess I'll have to be patient.

I really, really liked Fia as a character. She was complex, captivating and strong. I was always looking forward to the chapters focused on her. Annie was a bit of a letdown. Maybe it's only me, but I thought she was kind of in the way the whole novel. But towards the ending her part of the story picked up some pace and she was somewhat entertaining. Adam and James were a nice addition because they are really different from each other yet I thought Adam to be mostly superficially described (always nice and sweet), maybe in the next we will learn more about him. The romance didn't play such a huge role, which I'm grateful for because the plot and Fia were interesting enough without a superfluous love triangle to intrude.

Mind Games was a great start and after its ending I am literaly dying inside to get my hands on the next one. The ending was just that promising. If you are into paranormal novels (a great pick for fans of Shatter Me) with strong characters and a captivating plot, this one is for you.

A huge thanks to Harper Collins UK for providing me with a copy for review!