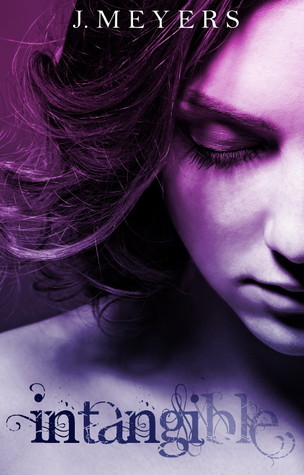 Twins Sera and Luke Raine have a well-kept secret—she heals with a touch of her hand, he sees the future. All their lives they’ve helped those in need on the sly. They’ve always thought of their abilities as being a gift.

Then Luke has a vision that Sera is killed. That gift they’ve always cherished begins to feel an awful lot like a curse. Because the thing about Luke’s ability? He’s always right. And he can’t do anything about it.

Intangible is such a great and captivating read. I really enjoyed the world-buiding in this one, there are a handful of distinct and great characters and the story draws you right in. and I wasn't expecting the many different creatures that are featured in this novel: elves, vampires and don't know what else we will meet in the next book. Even though the novel only has 318 pages, it was a really slow read.

The Plot: The story is written just right, everything happening in the right time and right place in the story. I was positively surprised that many creatures are featured and I'm certainly interested to know more about the elves and vampires and what part they play in the prophecy (and I would like to know more about the prophecy, as well but this is what sequels are for). I also enjoyed the "x-men" aspect of the story with Sera and Luke being gifted and trying to find out more about their powers. As mentioned the story does has a slower pace, even through the action scenes and that bothered me a bit while reading.

The Characters: Sera and Luke are twins and are perfect characters. And no, that's not always a good thing. They have an amazing relationship but sometimes this felt a bit unrealistic. And I almost couldn't find any flaws in these two! However I liked Sera and Mark's relationship, which was full of surprises. Luke and Fey also seems to have a platonic relationship that was really sweet. Now Jonas, he was an interesting character. I would certainly not mind to know more about him! Bad boys are always make a fun read.

Overall, I really liked Intangible. I don't know why I didn't came across it earlier! I'm really thankful for the author to giving me the opportunity to read this novel. It was a more slow-paced (still don't know why that happened since the book has so many twists) novel than I'm used to but it was worthy getting to the end. Now I can't wait to read the sequel and hopefully get me more Jonas and find out more about this wonderful world Meyers created.

J. Meyers grew up in Vermont and now lives in Central New York. When she’s not reading or writing, she’s chasing her four kids around, exploring the outdoors with them, relishing the few quiet moments she gets with her husband, baking sweet treats, and forgetting to make dinner. Though she cannot actually see the future nor heal with a touch of her hand, she likes to think her children believe she can. Intangible is her first novel. Website