Review: Fall For You - Cecilia Gray 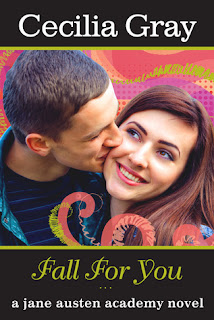 To say Lizzie and Dante are polar opposites is the understatement of the century. He's a snooty Exeter transfer with more money than Google. She's a driven study-a-holic barely keeping up with tuition. It's obvious that Dante thinks he's way too good for Lizzie. And Lizzie knows Dante is a snob with a gift for pushing her buttons.

But things are changing fast this year at the Academy. And when Lizzie's quest to stop those changes blows up in her face, taking her oldest friendship with it, she has nowhere else to turn but to Dante, with his killer blue eyes, his crazy-sexy smile, and his secrets... Secrets Lizzie can't seem to leave alone, no matter how hard she tries.


I'm a huge Jane Austen fan, so for me Fall For You was a must-read when the author mentioned that it was a retelling of Pride and Prejudice (my favorite Austen novel ever!). I know that probably many of you are afraid of reading a retelling of such a beloved novel but I can assure you that this one is worth it!

The Plot: Well, if you have read Pride and Prejudice, I'm sure you know how the story is going to unfold. However Fall For You takes place in present times and has a more modern feel to it. I loved how I could relate more to the retelling because, well, we live in 2012 and not in the 19th century! Even though I knew how everything would turn out, I found myself completely captivated by the story.

The Characters: All the characters are similar to those of Pride and Prejudice and they all have the same or similar names, so you won't have a problem to connect them to Austen's characters. I really loved the modernisation of the characters and their somewhat new characteristics. Furthermore Lizzie was even more likable for me because I also want to become a Journalist! Being a huge fan of Pride and Prejudice, I don't have any bad things to say about the other characters.

Gray did an awesome job retelling Austen's beloved novel in a way that will attract even more people nowadays. It tells the story in a way that stays true to the original but holds its own. Certainly some of you who love Jane Austen won't enjoy a retelling but I do advise you to give Fall For Me a chance! Gray's novel was a great summer read: light, easy and quick. Do get this one before the summer is over!


A huge thanks to the author for giving me a copy for review!

Cecilia Gray lives in Oakland where she reads, writes and breaks for food. She also pens her biographies in the third person. Like this. As if to trick you into thinking someone else wrote it because she is important. Alas, this is not the case.
Cecilia has been praised for "instilling a warmth and weight into her characters" (Romancing The Book Reviews) and her books have been praised for being "well-written, original, realistic and witty" (Quills & Zebras Reviews). Website / Twitter