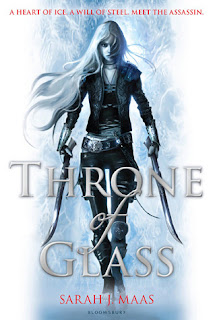 After serving out a year of hard labor in the salt mines of Endovier for her crimes, 18-year-old assassin Celaena Sardothien is dragged before the Crown Prince. Prince Dorian offers her her freedom on one condition: she must act as his champion in a competition to find a new royal assassin.
Her opponents are men—thieves and assassins and warriors from across the empire, each sponsored by a member of the kings council. If she beats her opponents in a series of eliminations, she’ll serve the kingdom for three years and then be granted her freedom.
Celaena finds her training sessions with the captain of the guard, Westfall, challenging and exhilirating. But she’s bored stiff by court life. Things get a little more interesting when the prince starts to show interest in her... but it’s the gruff Captain Westfall who seems to understand her best.
Then one of the other contestants turns up dead... quickly followed by another. Can Celaena figure out who the killer is before she becomes a victim? As the young assassin investigates, her search leads her to discover a greater destiny than she could possibly have imagined.

I was überexcited to get my hands on Throne of Glass and it was totally worth getting excited about. Firstly because I read the first novella and absolutely fell in love with the main character's fierceness. Secondly because Maas' writing is amazing. Thirdly because I was in need of immersing myself in a great adventure, and Throne of Glass certainly fits the bill. All these reasons should already have you running to pre-order it! Nevertheless keep reading to learn more about this great novel.


The Plot: If you haven't read the novellas, I strongly recommend you to read them; besides being awesome and short, they give you a great insight into the main character's life and how she ended up in prison. The story and its development was done amazingly. The story gets better and better the further you read. Maas writes a story full of action, adventure and mystery yet with all that, there is still time for a lot of romance. I do have to admit I was a bit confused about the magical aspects of the story but hopefully we will learn more about it in the sequel. Nevertheless I was expecting more of a connection to the novellas like her relationship with Arobynn and avenging Sam (you should read the novellas!).


The Characters: Celaena is badass! Probably one of my favorite heroines ever. She is an assassin, and not just any assassin, she is the best there is! Besides being a determined, strong and a bit sarcastic, what I enjoyed most about her is that she also has a sensitive side. She is the typical hard shell on the outside, soft on the inside. I enjoyed how her story was told in pieces, so we didn't get to know everything about her from the start, however I still do have some questions about her past. The prince, Dorian, was a nice character but who stole my heart was the captain, Chaol. So I should warn you that there is a love triangle but it shouldn't be a problem since it wasn't overdone. I also enjoyed another badass character: Nehemia. She doesn't look the type but she can totally take care of herself. Hopefully she will play a bigger part in the next one.

Overall, Throne of Glass was a page-turner. Even though it has 400 pages, I read the whole thing in one sitting. It was really refreshing to read something so original and different from what I've been reading in the YA genre nowadays. Maas' novel has everything someone looking for an adventure seeks: badass characters, amazing plot and world building (yes, it even has a map!) and a riveting mystery. Throne of Glass is like Game of Thrones or even Lord of the Rings for the young adult genre; so if you are a fan of these novels or fantasy in general, you should certainly check this one out.


A billion thanks to Bloomsbury UK for allowing me to review this amazing novel!