Review and Guest Post: Any Love But Mine - Debbie Davies 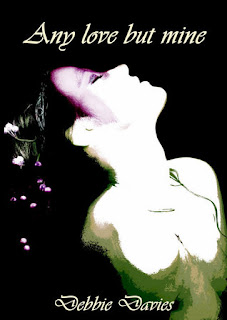 Look but don't touch has never been more true...
The gods forbade her to love, but love is a powerful force. Acacia has been created purely for Eros' pleasure but discovers within moments of being summoned into his presence that he has no interest in her whatsoever. Rejected, she is banished to Earth to serve as Eros' minion with the task of promoting the blissful state of love among all those around her, a state she must never indulge in with a human being herself on pain of immediate destruction. And then comes Josh, someone whose power of attraction over Acacia is so intense she will find it utterly impossible to resist him. But is he human? Is he a god? Or is he a trick of the gods? And what would happen should they kiss?

I'm a huge fan of Greek mythology so it was almost a given that I would enjoy reading Any Love But Mine. Certainly there were certain things that bothered me in this novel yet there many that utterly pleased me. Any Love But Mine is an enjoyable and light read that would fit in your summer read pile.


The plot: I really enjoyed the concept of the story: the three girls created for Eros now have to help him do his job on Earth. I was pleasantly surprised that Davies portrayed gods as they should be: strong and ruthless. It was an original idea but that could have been better executed. The author focus too much on the romance and I would have loved to know more about the gods and Acacia's "sisters".

The characters: I didn't like the main character very much. I understand that her sisters only told her the necessary and that she was left in the dark about many things but if you don't know anything about your origin, wouldn't you try harder to find out more? Anyway, the problem was that she was too focused on Josh. (slight spoiler ahead!) And later she even falls in love again in record time. The other characters were a lot more interesting, like Allana and her relationship with Hercules, or even Amora. Furthermore I was curious about Eros and I would love to see more of him in the sequel.

Overall, I really enjoyed the mythological aspects of this novel and the side characters were more to my liking than the protagonists. The ending was a small cliffhanger and I certainly would pick the sequel to know how everything will turn out! I would recommend this to anyone who enjoys new twists in Greek mythology and also anyone who won't have a problem with exaggerated romance.

And now we have the author Debbie Davies here for a guest post! We get to know more about Eros before Any Love But Mine (awesome!) and find out why he is the way he is in the novel.


Any love but mine...how it all began
“Eros, you are charged with the murder of over ten thousand innocent mortals and with planning to annihilate the mortal race, how do you plead?”
“Not guilty” Eros’s lips form the words slowly and he makes sure to enunciate each syllable so even the smaller gods, who have snuck into the court and are now crouching behind the twelve immortal Olympians desperately trying to hear Zeus’s punishment for the troubled young god of love.
Zeus ignores the collective gasp around him, everyone here knows Eros is guilty they had all been witness to his acts of destruction. They’d all watched in the Fates portal as he tore through the mortal world causing the wrong people to fall in love resulting in the mortals murdering the ones they initially embraced.
“Would you care to explain your plea?” Zeus assesses him curiously.
Eros nods as Zeus lowers himself slowly back into his throne and motions for Eros to begin. Eros who had been standing alone in the centre of the court takes a deep breath and turns himself to face his mother, Aphrodite.
“I'm not the one here who is guilty, you are mother. You are guilty of jealousy, deception and betrayal. You forced the one person I have ever loved besides you from my life because you were resentful of her and of my feelings for her. Despite your plan Psyche is still the most beautiful creature in every world - even more beautiful than you! You are just a shell of attractiveness inside you are empty. She glows inside, bright and magical, she is pure and wonderful and even though you have stolen her from my life you have still lost what you feared you would. You have lost me. The moment you told me that she was going to kill you if I gave into my feelings for her and brought her here to Olympus, the moment that lie crossed your lips you lost your son!”
Eros clenches and unclenches his fists; he takes a deep breath in and rolls his lips back baring his teeth. An angry growl emanates from deep within his soul; he lowers his eyes to the floor searching for some sort of strength to restrain himself and go on.
“My heart has been torn from my body because you made me give her to another man who she will now love until death. A man I cannot kill to release her from my spell and if I cannot have love why should anyone else!”
Eros looks at his mother expectantly but she has not changed her demeanour throughout the whole confrontation. Everyone’s eyes are now upon her, some look at her in disgust while others, those who do not care for the mortal race much just look bored. None of them receive an answer though instead she angles herself towards Zeus ignoring her child completely. Eros shakes his head and laughs lowly but he too turns himself back to Zeus to await his fate.
“Aphrodite is this true” Zeus demands as he rises to his feet now the focus is back on him. The clear stones on his wrist cuffs spark the way they always do when he becomes angry. The Olympians hold their composure but the smaller gods turn from crouching figures into mere shadows.
Aphrodite only nods revealing no emotion.
“Eros you are the victim here but you cannot be fully excused of your crimes, you need to return to the mortal realms and make amends for what you have done. You need to give back to the mortals the gift of love”
Eros shakes his head, his movements becoming rapidly more violent his whole body shakes as his rage breaks through.
“No!” his cry bellows throughout the hall “No I won’t do it! Why should I, my one love has been stolen from me why should I allow your precious race to feel something I will never again experience, why should I allow any of you to either! I could make you all now fall in love with the wrong person, I could make you love another so badly you would want to give yourself to them in every physical way no matter how wrong it is” his eyes trail to the virgin Olympians who look horrified at the thought of losing their immaculate state.
“Enough! Eros, you need to make amends for what you have done and then I will see what I can do about returning Psyche to you. I'm sure I will be able to find away” Zeus pleads with Eros but he shows no sign of relenting. Zeus exhales loudly; looking resigned he turns to the guards waiting at the base of his throne.
“Bring her in” Zeus instructs his guards. Everyone turns to stare at the large gilded doors that seal them in this arena.
“What is this” Eros snarls in fear he is about to be tricked again.
“I wanted to wait and give her to you after you had done what I have requested but well, here, this is your love” Zeus motions for the doors to be opened and there stands a beauty so immense everyone forgets how to breath. Eros’s body melts and he rushes to be at her side, the tears pool at the corner of his eyes but he stops short when Zeus’s voice breaks through his haze of happiness.
“This is Allana, your Erosian”
Posted by Unknown at 2:58 PM

Email ThisBlogThis!Share to TwitterShare to FacebookShare to Pinterest
Labels: Any Love But Mine, Debbie Davies