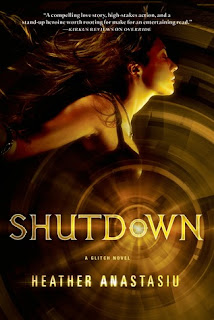 The battle is all but over, and hope seems to be lost. Zoe and her fellow Resistance fighters are on the run, having lost their home, their protection, and their leader. They are outnumbered and outmatched by the powerful corporation that controls the world, and the cruel Chancellor is inches away from completing a scheme that would kill most of humanity. Zoe's only remaining option is to chase the impossible dream of upending the Link system, freeing the world from the hardware that controls their thoughts and emotions, and hope it will trigger a revolution.

The plot requires a nearly impossible mission to infiltrate the dangerous Community, and it is a task that Zoe must unfortunately complete alone. With challenges and surprises at every turn, nothing goes according to plan. Adrien's visions of the future now show two possible outcomes: one in which they succeed, and one in which humanity falls. It all lies in Zoe's hands.

Shutdown was a fantastic conclusion to this captivating series. One of the things that surprised me the most about this trilogy is that every book was so much better than its predecessor, you could really feel the development not only in the characters but also in the plot and in the author's writing as well. Even though I had already enjoyed Glitch a lot (it received a 5-star review), Shutdown was even more fun to read and I would give it a better rating in a heartbeat, if my rating system didn't only go to five stars.

The story picks up where Override left off. The plot keeps its pace throughout it, there was always going on that you won't want to read this during finals' week (like me!) since you won't be able to put it down. Seriously. However what captivated me the most wasn't the final battle, but the problematic with Adam. The end was really well-written and meant to be, I couldn't have imagined a better ending and also the way the last battle was resolved was also surprising (in a good way).

The characters have developed so much since Glitch. Zoe is a great main character, fierce yet emotional, but mostly she is realistic. But Adam was most certainly the show-stealer in Shutdown. I've never read a novel in which a character changes so drastically and that was most refreshing. I think I even enjoyed Adam more as a character after the kidnapping because he was just unexpected. He was something completely unique and less similar to all the other YA boys. And as I always say about Anastasiu's series, the side characters complement the story well in a x-men (awesome) kind of way.

I'm very happy that I was able to read an Advanced Reader Copy of this marvellous novel and also very satisfied with how things ended (you won't be disappointed!). My favorite scenes were those between Zoe and Adam, since it was very captivating to see the romance bloom again. I'll certainly pick up other novels by this author because Anastasiu showed me that she can write remarkably well with many unexpected and refreshing twists and turns. A great conclusion to an even great series!

a Rafflecopter giveaway
Posted by Unknown at 5:02 PM